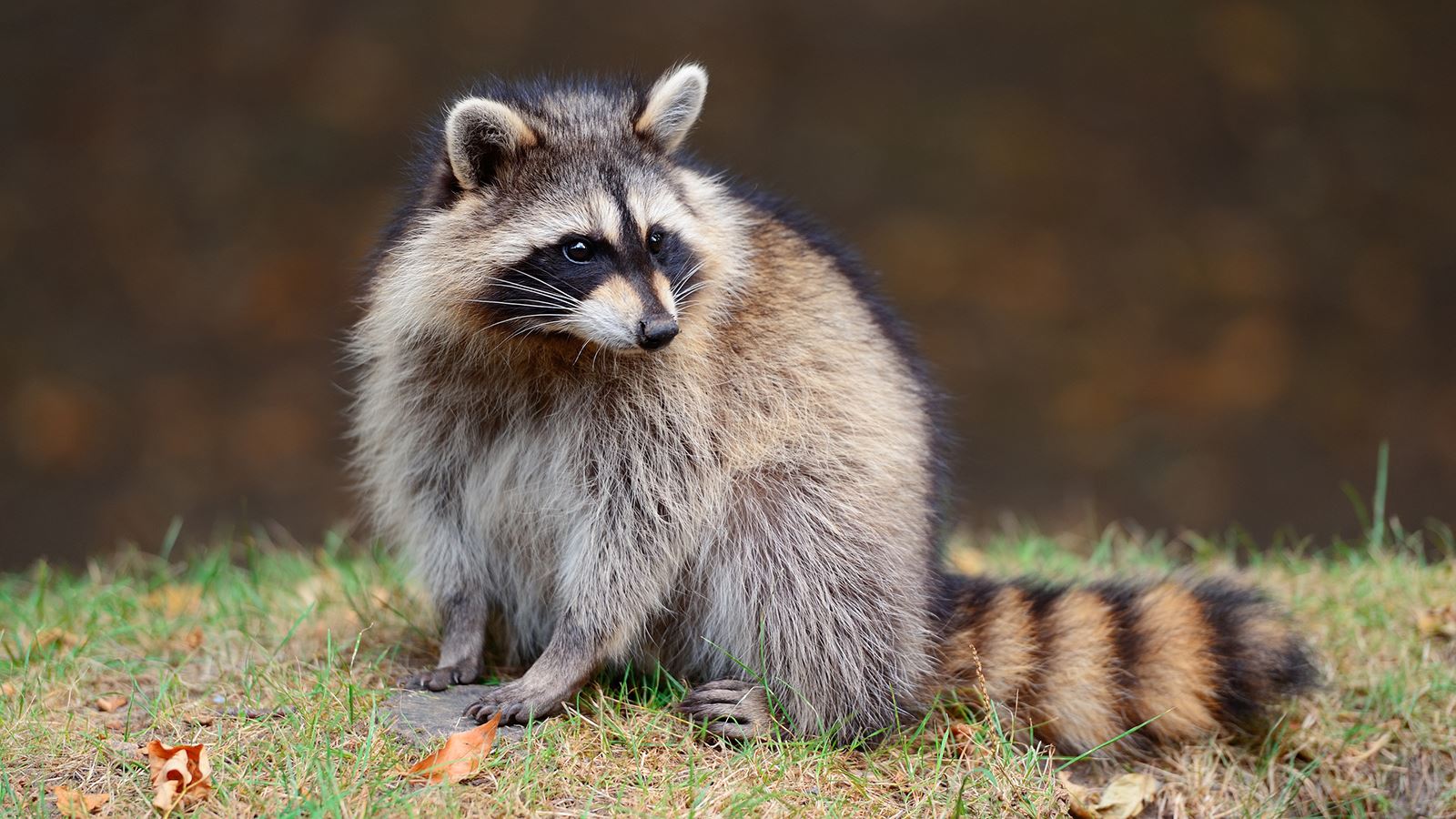 The raccoon is a medium-size woods mammal with the scientific name Procyon lotor. Procyon means “before dog,” implying the raccoon is less advanced than the dog from an evolutionary standpoint; lotor refers to the species’ habit of dunking food in water before consumption. The common names “raccoon” and “coon” are anglicized versions of the Indian word “arocoun.” It’s fitting that the common names evolved from a Native American word, as the raccoon is strictly a New World animal, found in North and Central America. As with many wildlife species, we view the raccoon with mixed emotions. Some raccoons are destructive, damaging crops and gardens, and raiding nests of domestic birds. They’re valuable in many ways, too: a prime pelt brings good money on the fur market, and hunting raccoons with hounds is an exciting, sport with a tradition as old as the hills. But in the end, the true value of any life form cannot be measured in man’s terms. Raccoons have worth simply because they are one of the many fascinating and interlocking segments of nature.

Biology
Raccoons range in size from 28 to 38 inches, which includes a 10-inch tail, and weigh 10 to 30 pounds. Males are generally larger and heavier than females. Records exist of raccoons weighing up to 40 pounds, but individuals this heavy are extremely rare in the wild. A raccoon’s fur is long, soft and colored a grizzled black-brown. The bushy tail is marked with alternating rings of light and dark fur. Broad cheeks, a long slender muzzle, erect, rounded ears and a black strip or mask across the cheeks and eyes give the raccoon a masked banditlike appearance. Albinism (a lack of pigment producing a white individual with pink eyes) and m e l a n i s m (which produces a totally black animal) occur infrequently. The fur on a raccoon’s feet is light gray, and the soles of the paws are hairless. Raccoons shed in April, producing coats with thinner, lighter guard hairs; in autumn, heavier fur fills in. Usually by late November the winter coat has replaced the shorter summer fur. At that time the pelt becomes prime. Raccoons are found throughout Pennsylvania, often near water — lakes, streams, rivers —but also on ridges and in suburban areas. They adapt well to people and human activities; some raccoons live in cities, where they den in storm drains and attics and raid garbage cans and pet dishes. Raccoons are omnivorous. This means they eat both vegetable and animal matter, including wild cherries and grapes, raspberries, blackberries, persimmons, apples, beechnuts, acorns, melons, corn, grass, leaves, earthworms, crickets, grasshoppers, beetles, grubs, fish, frogs, crayfish, mice, carrion, eggs, etc. Raccoons have excellent senses of hearing, sight and smell. They also possess an acute sense of touch in their forefeet, enabling them to catch fish and other small, quick prey. Long, sharp claws anchor slippery food items. No one knows exactly why raccoons occasionally dunk food taken in or near water before eating it. Many naturalists believe raccoons derive some information from handling the food underwater, which may cause them to accept or reject it. Raccoons are adept climbers and, being nocturnal, they spend most of their daylight hours in trees. On warm, bright days they like to sun themselves while lying flat on horizontal limbs, in squirrel leaf nests or curled up in the crotches of trees. Then at night, they descend in search of food. They travel, feed and hunt almost exclusively on the ground. Most raccoons have central home dens as well as others scattered about their feeding ranges. Adult home ranges are about a mile in diameter, greater when food is scarce. An ideal den or nesting site is a hollow in a large tree trunk or limb, but raccoons also use old woodchuck burrows, caves, rock crevices and abandoned farm buildings. Raccoons have short, stout builds. Like bears, they are plantigrade (flat-footed), walking on the sole of the foot with the heel touching the ground. They’re relatively slow runners but fierce fighters — especially females with young. Men and dogs are the adults’ main enemies, although owls, foxes and bobcats may take young that stray from their mothers’ protection. Raccoons are strong swimmers. A raccoon makes a variety of sounds, including barks, hisses, a wailing tremolo, a churr-churr noise often given while the animal is feeding, and a piercing scream of alarm or fear. By late autumn, raccoons have eaten enough to produce a heavy layer of fat that helps sustain them until spring, although they eat whatever food they can find in winter. They do not store food. Unlike woodchucks, raccoons are not true hibernators; they den up and sleep soundly when temperatures fall below about 25 degrees, but emerge at different times throughout the winter during warm spells. They are considerably leaner by spring, having burned up much fat. Breeding takes place in January or February. Following a 2-month gestation period, young are born in March and April. Usual litter size is 3 to 5 young, with 4 the average. Cubs weigh about three ounces at birth, are covered with yellow-gray fur and have faintly banded tails. After about 19 days their eyes open, and when four weeks old they begin to accompany the female on short feeding forays. Weaning starts at about eight weeks; by the time they’re three or four months old, cub raccoons are large and independent enough to be on their own. The male usually stays with the female after mating and until babies are born, and may help rear the young. By the time the young mature, however, the father has usually gone off on his own. Many family groups — mother and offspring — stay together through the young raccoons’ first winter. Most yearling females breed at this time, but males of the same age probably do not breed for another year. If for some reason a female doesn’t breed in winter, she may become receptive later in the spring and bear young in the summer. Small raccoons found in the fall are the result of this late breeding. By late fall, young raccoons follow their mother away from the den nightly in search of food. In spring, juveniles disperse from the areas in which they were born. Young raccoons may move only a mile or two or may travel long distances. Records exist of young males apparently dispersing up to 150 miles, although movement of this magnitude is unusual. Raccoons exhibit some social hierarchy; most dominant are older males and females with young. However, individuals do not defend fixed territories or ranges against other raccoons. Captive raccoons have lived up to 18 years, but their life expectancy in the wild is probably about 10 years. Important mortality factors are lack of food in a hard, long-lasting winter, parasitism, hunting, trapping and disease. Many raccoons are also killed on highways.

Population
Although it experiences occasional declines, Pennsylvania’s raccoon population is stable. Nationwide, raccoons occur in all of the lower 48 states and into Central America, but they’re not found in the higher reaches of the Rocky Mountains or some of the Western deserts. Local populations may fluctuate because of severe weather, food scarcities, development of rural land, hunting and trapping pressures, outbreaks of rabies and distemper, and habitat changes. Population concentrations vary with habitat; researchers have estimated one raccoon per 0.63 acres of excellent habitat and one raccoon per two acres of good habitat. Raccoons become more susceptible to disease if they overpopulate an area, because they’ll encounter one another more often. However, as long as fur prices provide an impetus for trappers to harvest raccoons, disease will only minimally impact populations.

Habitat
Raccoons are adaptable, and many types of terrain provide suitable areas for them to live. As a rule, they prefer forested areas offering plenty of den sites. They favor hardwood over coniferous forests, because hardwoods provide more food (nuts, fruits) and are more apt to develop cavities and hollow limbs suitable for shelter. Swamps and fertile bottomlands are good habitat; raccoons often thrive near water courses, where good hunting opportunities exist. A raccoon will wade up a small spring run in search of crayfish, aquatic insects, minnows and other food. The Game Commission has never had to improve habitat specifically for the raccoon because the species manages well on its own. In managing forests on state game lands, however, the Commission tries to protect mature hardwoods, which are used as den trees by raccoons and many other wildlife species. A varied habitat — trees of different ages and types, brush, herbaceous vegetation — is ideal because it provides food during all seasons. In general, habitat improvement for turkeys, squirrels or deer also benefits raccoons. Grassy openings are excellent sources for insect food. Food-producers such as grapevines, blackberry, raspberry and greenbrier patches, black cherry trees, oaks and beeches should be encouraged and maintained. Beaver dams benefit raccoons — and many other wildlife species — by producing plentiful aquatic food.